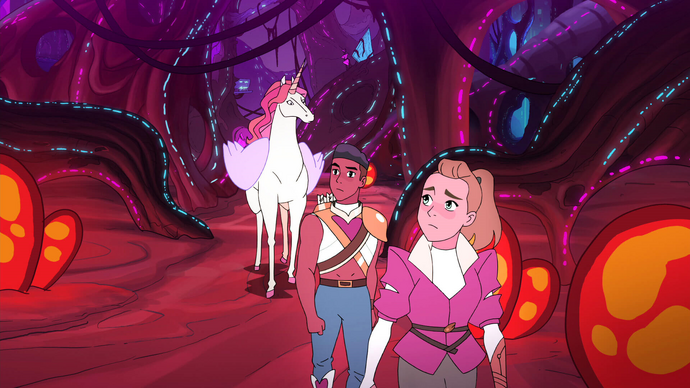 Fractures
Destiny Part 1
Beast Island is the eleventh episode of Season Four and the thirty-seventh general episode of She-Ra and the Princesses of Power. It was released on Netflix with the rest of Season Four on November 5, 2019.

Adora, Bow and Swift Wind arrive on Beast Island and make a shocking discovery. Glimmer heads to the Crystal Castle to talk to Light Hope.

Near the end of their trip, Swift Wind hears a strange noise and Mara's Ship plummets from the sky. After crash landing in the water surrounding Beast Island, Adora, Swift Wind, and Bow trekked ashore. Swift Wind continued to hear strange noises that his companions could not detect, but they forged ahead until they came across an insectoid, metallic monster. Adora attempted to transform into She-Ra, but was unable to do so, and they were only saved by the timely arrival of King Micah, who single handedly drove it away with a volley of powerful sorceries.

On the mainland, Glimmer teleports into the Crystal Castle. Initially, Light Hope does not respond to Glimmer's hails, so she releases a pulse of sorcerer's power. Immediately, Light Hope's defenses activate, and several spiders converge on her.

Back on Beast Island, Micah reassures himself that Adora and Bow are real, haunted by hallucinations from his years along on the island. He explains that the Horde exiled him there and intended for him to die, and aggressively notes that he survived. Before they can exchange pleasantries, creatures converge on them once again, so Micah has them flee.

After arriving at a safe area, Micah quickly snatches a bug and, after Adora and Bow decline it, eats it. Bow is very disturbed. He confirms that he encountered Entrapta, but when Swift Wind asks him where she went, Micah is shocked that a horse is talking to him. After composing himself, he explains that the sound Swift Wind heard was "the signal", from a piece of First Ones' tech that still works, degrading your resolve. He is reluctant to go to the center where it is strongest, but agrees to help them find Entrapta if they take him from the island. As they walk inland, Adora begins to become depressed, ostensibly over not being able to become She-Ra.

In The Crystal Castle, Glimmer has defeated the last of the spiders and proclaims her desire to use the Heart of Etheria, at which point Light Hope grants her temporary administrator access and deigns to speak with her. In Beast Island, Micah and company find themselves hunted by pookas, and although they try to run, Bow begins to panic and mentions how Glimmer could have teleported them out. Micah becomes shocked that Glimmer would be in the field, and demands to know if she is older now, and exactly how long he had been gone.

Unfortunately, while he stopped to question Adora, they became entirely surrounded by pookas. The pookas force them close to the signal, where Swift Wind and Bow rapidly succumb to its depressive effects. Adora and Micah resist it, but when Adora tells Micah that Glimmer needs him to come home to help her be queen, he realizes that his wife Angella is gone. Crying, he also succumbs to the signal.

As Adora also begins to succumb, she remembers Angella's last words, to have Adora take care of each other, of Glimmer. Taking inspiration from it, she activates her sword and successfully becomes She-Ra, blasting away the vines that had ensnared them and combating the signal's effects for everyone. They prepare to fight the pookas, but suddenly they all flee, and a larger mechanical monster arrives. From within, Entrapta emerges, saying that she saved them.

Finally, in the Crystal Castle, Light Hope explains to Glimmer that the only way to access the Heart of Etheria is by balancing the planet, specifically by making sure each princess is connected to her Runestone. The only elemental princess not connected to her runestone at this time is Scorpia.

Retrieved from "https://she-raandtheprincessesofpower.fandom.com/wiki/Beast_Island_(episode)?oldid=50064"
Community content is available under CC-BY-SA unless otherwise noted.