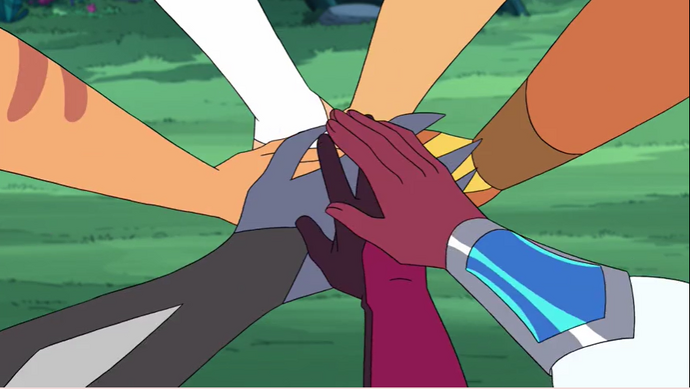 The Best Friends Squad returns from space and regroups with what remains of the The Rebellion on Etheria. They quietly infiltrate the town of Erelandia to free the inhabitants from Horde occupation while Netossa tries to release Spinnerella from being controlled by Horde Prime's chip.

Glimmer and crew returned to Etheria and found the rebel base in ruins. They decided to gather intel and so Glimmer teleported everyone to Erelandia which they find out is guarded by bots and clones. Entrapta, Bow, Glimmer, Catra and Adora followed Wrong Hordak into the village in disguise.

On his ship, Horde Prime watched as dozens of planets begin to rise up against him including some images of the Star Siblings fighting back in the name of The Rebellion and She-Ra. Prime vowed to find a way to use the Heart of Etheria without She-Ra, he also sent word to the chipped Spinnerella.

The heroes tried to question the village folk but the locals were too scared to answer questions, except for one shopkeeper who tells the hero's that the Rebellion has joined the Horde and that Princesses attacked the town. Just then Spinnerella landed in the village and attacked the heroes. After trading blows and pleas to stop the attack, Netossa joined and began defending the town from Spinnerella. Rather than risking hurting their chipped friend Glimmer teleported everyone away from the fight. Netossa saw Catra and instantly attacked, trapping her in a net. She had the same reaction to Wrong Hordak. She then explained the amount of damage done, all the Princesses and friends who were now under Prime's control.

Aboard Prime's ship Hordak pondered the data crystal that Entrapta gave to him. Prime confided in Hordak that he had forgotten something and needed to reactivate a clone to remember. Hordak brought the discarded clone online and Prime remembered that the First Ones relied upon magic which confused him while it triggered memories of Etheria in Hordak.

Glimmer and the rest returned to Erelandia, and using Wrong Hordak to draw out two clones defeating them. Next they began an assault on the enemies inside the village. She-Ra and Netossa attacked Spinnerella while the rest handled the bots. While fighting her wife, the conflict became too great for Spinnerella and the chip grew in strength, hurting her and she fled. With the Horde purged from the village, the citizens pledged themselves to the Rebellion.

Prime watched the return of She-Ra on a screen in his ship and decided to immediately go to Etheria and deal with the Princesses and their allies himself. While on Etheria, Netossa led everyone to the hideout and there was a joyous reunion. Unfortunately, Frosta saw Catra and downed her with an ice-haymaker before being told that she'd switched sides. Adora pledged to free all their friends and defeat Prime. Strangely, nobody reacted to the presence of a clone.

Retrieved from "https://she-raandtheprincessesofpower.fandom.com/wiki/An_Ill_Wind?oldid=48172"
Community content is available under CC-BY-SA unless otherwise noted.